The Leadership Rockwall Class of 2022 had a day full of learning about economic development and city government in March.  In fact, there were six stops throughout the county!

The first stop was the City of Rockwall’s council chambers where the group was addressed by City Manager Mary Smith, Mayor Kevin Fowler, Director of Planning Ryan Miller.   The group explained the structure of Rockwall’s city government and the responsibilities of the city council and mayor, which functions as a board of directors, compared to that of the city manager, who runs the day-to-day operations of the city.

Next, the group went to the City of Fate’s city hall to meet with Justin Weiss, the Assistant City Manager, to learn about Fate’s growing downtown development and their strategy for recruiting a healthy tax base.  There are several exciting construction projects that will break ground in the next 60 days there.  Fate seeks to attract mixed-use developments that will create a thriving, walkable downtown.

After finishing the info session there, the group had a two-stop adventure with the Rockwall Economic Development Corporation (REDC).  The first was at the state-of-the-art K E Andrews building on Ridge Road in Rockwall where the group got a tour of the facility.  There was a gym, putting green, ping pong tables, a large cafeteria and many amenities that prompted some of the group to ask for applications for the tax consulting firm!  After enjoying a wonderful lunch and learning about how the REDC drives economic growth in the area, the group then headed to tour Channel Commercial Corporation’s facility on Justin Road in Rockwall.  The company specializes in making housing and related items for the telecom business.  With several hundred employees on site and high-end automation, it was truly a site to see.  Both of the companies benefited from economic incentives from the REDC and our community benefits from having hundreds of good jobs right here in Rockwall.  Rockwall loves commercial development as it diversifies the tax base and reduces the tax burden on residents.

The final stop of the day was to the City of Heath’s town hall to learn about their downtown development initiatives from Suzanne Burke in Communications and Assistant City Manager Kevin Lasher.   Heath is and wishes to remain a rural community and does not prioritize commercial development other than services and amenities for its population.

Perhaps the most interesting takeaway of the day is the three city’s distinct visions for who they are and where they are going.  Each has a plan and each is sticking to it.  As Justin Weiss in Fate quoted Yogi Berra, “If you don’t know where you are going, you might wind up someplace else.” 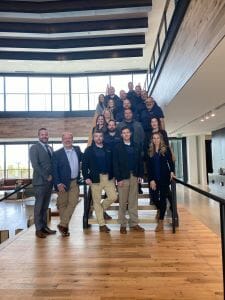 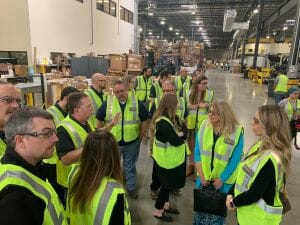 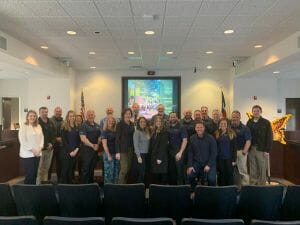